One of the questions that I get asked most about during consultations is how Invisalign compares with fixed appliances. So I thought I will  turn my attention to  help answer this question. 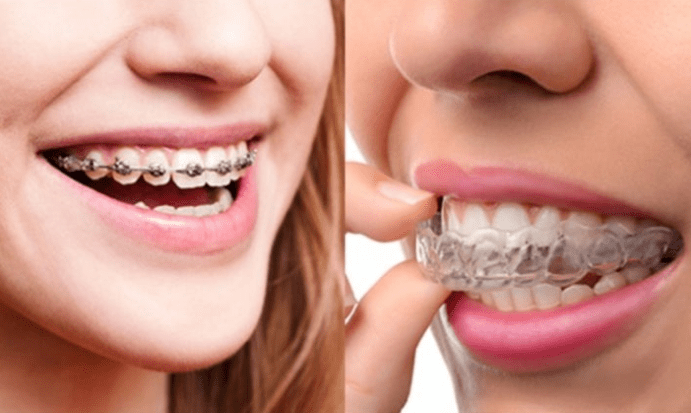 A bit of history

In the world of orthodontics, using plastics to move teeth is not new. Orthodontists all over the world have used plastics for decades to move teeth. However, it was a tedious process with teeth having to be sectioned off models and reset into the next desired position. Where Invisalign made a breakthrough is with the development of a software that could position the teeth to their next desired position. Once in position, 3-D models could be printed and the associated aligners made. So the software and the use of 3-D printing is what set it apart from the old laborious way which worked, but it took many man hours.

What is the gold standard?

Any orthodontist would be able to tell you that the gold standard of a proper orthodontic finish is what is know as Andrew’s six keys. They refer to 6 features which an orthodontic result should achieve before it is considered a properly finished case.

Superior esthetics of the Invisalign appliance

There is no need to speculate, no need to wonder and no need to believe anybody  who says otherwise, there are several well constructed, peer reviewed scientific articles that conclude that Invisalign or any clear aligner system cannot finish as well as normal braces. Without boring you with the technical details, let me quote form some important studies:

1. A Systematic review of the accuracy and efficiency of dental movements with the Invisalign appliance. (Galan et al, Korean Journal of Orthodontics, 2019)

“ The level of evidence was high. Although it is possible to treat malocclusions with plastic systems, the results are not as accurate as those achieved with fixed appliances”

“ It appears that Invisalign may not be as effective as fixed appliances in achieving “great improvement” in a malocclusion.”

Cordoso et al (Progress in Orthodontics, 2020) found that respondents noticed that Invisalign was less painful in the first few days but thereafter, no differences were noted in pain levels. In other words, you will get used to it after awhile.

All in all, Invisalign or any clear appliance system is really meant for people who would like to align their teeth so that the casual observer will “think” that they have straight teeth. Overbites, perfect alignment, overjets, achieving a correct angulation of the teeth and obtaining a good bite is really not for the clear aligners.

But my dentist says Invisalign is a good appliance!!

So here is a tip for any of you who are visiting any dentist who is telling you that Invisalign will work for you. Simply ask 2 questions. Ask him if he can name the 6 features as stipulated in “Andrew’s six keys of occlusion”. If he cannot name you the six keys, you should run far away because he does not even know what he should be aiming for in the first place!

At the end of the day, patients must decide what is more important to them. A compromised result but an orthodontic treatment process that has superior esthetics or a good result with an appliance whose esthetics are not as good as Invisalign. There is no right answer, only an honest one that only you can deliver.